Lynn is a professor at Texas State University and is the former president of the National Association for Music Education (formerly MENC) and a seasoned group leader.

Day 01: Depart for Morocco
Depart from New York and fly to Casablanca, Morocco.

Day 02: Arrival and Career Enrichment
Upon arrival at the Casablanca Mohammed V Airport you will be met by your local guide. The journey begins this morning with a driving tour of Casablanca with the chance to see the Hassan II Mosque, The Habbous, the Royal Palace, the Art Deco area and Marché Central on your way to lunch at a local restaurant

This afternoon you will meet with a music teacher in their home. If possible (schools are closed in August) you may have the chance to visit a local music conservatory or other international music school. Make your way onward to Rabat to check into your local hotel. In route see some additional sites including a short tour of Rabat to see Oudaya Kasbah, the Medina, Hassan Tower, Mohamed V Mausoluem and the Chellah.
Overnight:  Mercure Sheherazade Hotel
Meals: Lunch, Dinner

After breakfast at the hotel explore Rabat. Visits today will include a chance to further explore the Hassan Tower, Mohamed V Mausoleum, the Chellah Necropolis and the Museum of Modern Art. Head to Meknes which is a short distance away.

Stop for lunch at a typical restaurant in the old city Palais Terrab, where you will meet with a professional ISSAWA troupe after they perform while you dine. Immediately following, you will talk with musicians to learn about their instruments and play some music together. They are known for their spiritual music, which generally comprises songs of religious psalms, characterized by the use of the oboe ghaita (similar to the mizmar or zurna) accompanied by percussion using polyrhythm.

The afternoon will be dedicated to a visit to the Roman ruins in Volubilis (a UNESCO World heritage site). A Mauritanian capital, founded in the 3rd century B.C., this city became an important outpost of the Roman Empire and was graced with many fine buildings. Extensive remains of these survive in the archaeological site. Continue on to Fez for dinner and check in.
Overnight:  Barcelo Hotel Fes Medina
Meals: Breakfast, Lunch, Dinner

Day 04: Fez city exploration
The day will be devoted to exploring the wonders of Fez, the most ancient of the imperial cities founded in the 8th century by Moulay Idriss II. Stops today will include the medieval Medina (market) with its minarets of Madrasa Bou Inania & Attarine. Visit the lovely and historic Nejjarine Fountain, Moulay Idriss Mausoleum, and the Karaouine Mosque.
Dine this afternoon at a private old Andalucía riad while you listen to a troupe playing Andalusian Moroccan music.
The classical music of Andalusia reached North Africa via centuries of cultural exchange, the Almohad dynasty and then the Marinid dynasty being present both in Al-Andalus and in Morocco and most of North Africa. Mass resettlements of Muslims and Sephardi Jews from Cordoba, Sevilla, Valencia and Granada, fleeing the Reconquista, further expanded the reach of Andalusian music. The musical and poetic traditions of those who fled have been preserved in Morocco and other Maghreb countries.

Day 05: Berber Music and onward to Marrakech
Immediately after breakfast, depart for Marrakech via the mountains and the cedar woods of the middle Atlas passing by Ifrane, a charming ski resort and Azrou, an important handicraft center. In Azrou stop for some mint tea and enjoy listening to a Berber singer. Mohamed Rouich is a Moroccan artist best known for promoting the Berber music through his original compositions. He is considered one of the last instrumental players of "loutar", a rare Moroccan instrument falling under the family of violins. In 1964, he started his career as an amateur singer on the National Radio of Morocco to become, in 1979, a professional singer in the Berber and Arab category. Continue on to Beni Mellal for lunch.

After lunch continue on to Marrakech via Ouzoud to see the Ouzoud Waterfalls, the most impressive in the kingdom. Your walk in to see the falls will showcase the local flora and fauna.
Dinner with your fellow travelers will be provided at a local restaurant this evening after hotel check-in.

Day 06: Red Pearl City
Spend the day exploring Marrakech, founded by the Almoravides at the end of the 11th century. The historical sites you will visit today include Medersa Ben Youssef, the Majorelle Garden, the souks & the famous Jemaâ el Fna Square.

After lunch and just before you start to explore the souks (markets), you will enjoy listening to the famous Gnaoua music while meeting with a young Gnaoua troupe. Morocco's gnaoua (or gnawa) tradition is music where Arab and black sub-Saharan Africa meet. With its special mix of African magic and Islamic rituals, Gnaoua rituals combines both music and acrobatic dancing to create a trance and promote healing.

Located in the foothills of the Atlas Mountains, Asni is a well visited small Berber town. Enjoy your drive to Asni and see some of the local sites before continuing to Imlil, a small Berber village in a stunning valley, to explore some of the most beautiful scenery Morocco has to offer. Enjoy tea in a Berber home as well as the wonderful natural hospitality of these kind mountain people.

Day 08: Marrakech
Breakfast will be provided today and the remainder of the day is yours to explore independently. Lunch is on your own today. Join your fellow travelers for a final farewell dinner this evening.
Overnight:  Atlas Medina & Spa Hotel
Meals: Breakfast, Dinner

Day 09: Time to say goodbye
Say goodbye to Morocco and all of your new friends! Your guide will accompany you to the local airport for your flight back to New York.

Please note: All itineraries are subject to change based on availability of hotels, flights and hosting organizations at the time of finalization of booking. Comparable meetings and activities will be arranged should an itinerary change be necessary. 30 days before departure, a finalized itinerary will be available and reflect final details.

Book Now
Thank you for your interest in our Music Education Journey to Morocco with Lynn Brinckmeyer. We will be in touch within the next 24hrs. Your Nanda Journeys Team 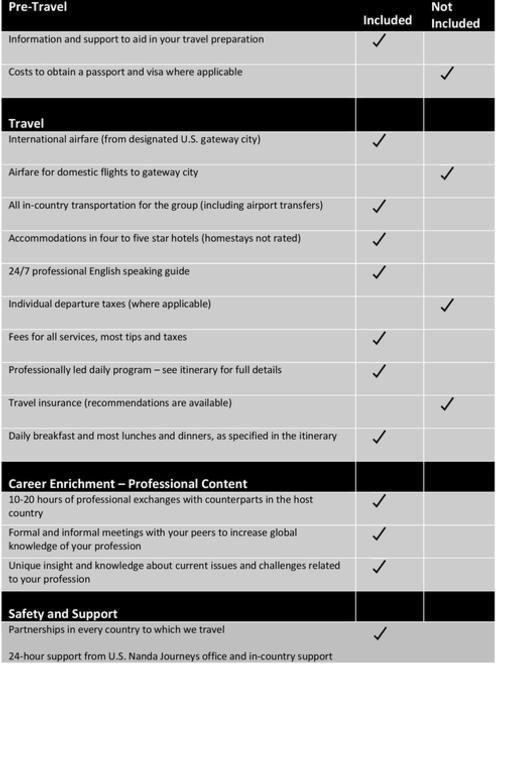 The Kingdom of Morocco is located in northwestern Africa and has North Atlantic and Mediterranean coastlines. Home to nearly 34 million people, the country has been flavored by Arab, indigenous Berber, European and Sub-Saharan cultures. With a long history of independence not shared by many of their African neighbors. Our Music Education Journey will include career enriching highlights such as; lunch with an Andalusian troupe of local Moroccan musicians; meetings with local music teachers to learn about the education of students in the musical arts; interaction with a local ISSAWA troupe, a religious and mystical brotherhood founded in Meknes in the 1400s known for their spiritual percussion music and of course.  You will also visit the historical towns of Fez and Marrakech and explore the vibrant markets and historical monuments! Visit with a rural Berber family and share some tea. Join us Morocco - it's a must visit destination!

"Nanda Journeys has created a life changing opportunity for us to visit one of the most exotic countries in the world to learn about music, music education, and the arts."

The US State Department provides a wealth of information for US travelers. You can browse visa and passport information,  Emergency information and much more. Rest assured though, Nanda Journeys will always remain abreast of all relevent traveler information for your chosen destination!